If you want to win regional elections – Freebies and appeasements have become the way of life in India. This is the new emerging India, which needs to be accepted. General public are being lured with freebies so much that the majority population had lost the mindset of thinking for long-term future of the country. This is more significant in the regional elections, was started in Orissa in late 2000’s by Naveen Patnaik with various schemes and followed in Tamil Nadu by DMK & AIDMK. But now it is being used as a thumb rule for election victories in all states. The 2019 election results and poll campaigns in Telangana, Andhra Pradesh and Madhya pradesh have proved it to be the only way left for politicians.

The current year Delhi elections revolved around the same concept of freebies, Muslim votes. In addition to the two, AAP (Aam Admi party) had adopted a new addition with Soft Hindutva, whose votes were being consolidated with BJP. If you analyse the trend in 2020 Delhi elections victory by AAP, the magnitude was much larger with free bus rides to women, free electricity etc as freebies which garnered the women and middle class votes heavily. This was coupled with Muslim appeasement politics of being silent for Shaheen bagh protests from the top brass Mr. Aravind Kejriwal and adding fuel through his own party MLA Amanutullah Khan, who happened to be the main instigator of these protests initially. Free Yatras for Hindus withing various communities funded by AAP and temple visits from top brass had attracted the neutral Hindu votes which was vote base of BJP.

This cover up strategy was so meticulously planned with the guidelines of Poll strategist Mr. Prashant Kishore, whose main idea is get a party win by segregation, selection , freebies and divide in disguise. This exactly worked for AAP, where in one line up was constantly being mooted for Anti CAA and NRC protests thereby fueling and consolidating Muslim vote bank which forms close to 12.5% of Delhi vote share. One line up in the same party was working constantly through the top brass concentrating on Freebies for Hindus addressing the soft hindutva with casteism factor, free rides & pilgrimages for Hindus funded totally by AAP showing as community Yatras. These were the main factors which helped AAP to outgun BJP in their own turf. 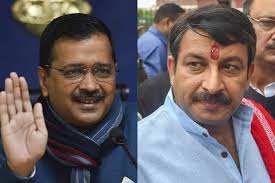 At the same time BJP was totally off guarded with wrong candidate selection, shabby candidates and too inferior CM candidate Mr. Manoj Tiwari who horded no merits to sustain or meet the standards of Aravind Kejriwal. It would no surprise to say that BJP was fighting with Mr. Modi against Mr. Rahul Gandhi from Congress, where in the victory is well decided ahead of elections and comparison too unrealistic downgrading the standards. This was coupled with wrong handling of Shageen bagh protests and too delayed response from Delhi police in tackling the protests and a great intelligence failure. BJP ignored the basic fact that AAP major strength and evolution happened through protests and hard core Dharnas and Aravid Kejriwal is the master of the game. The only difference was this time it coupled with the strategy of Prashant Kishore which added fuel to the fire.

Anyhow the common people are happy in India with short term goals and enjoy the freebies as long as it does not effect them personally. This weakness of middle class and poor is being misused by politicians without concentrating on the core problems, employment and lifting the standard of living. The only objective left with regional parties is to win elections by freebies and appeasement mode rather than developing the state and thereby adding value to the nation in total. This culture will lead to misery at one point of time in India and time will teach a big lesson.