by Hindu Media
in Hinduism, Religion
0

It is a great and auspicious day for 1.2 billion Hindus across the world to witness the foundation stone laying ceremony on 5th August 2020 in Ayodhya. It is the sacred birth place of Lord Ram, where in original Ram Mandir or temple was demolished by Moghul invaders and constructed a Mosque called Bari Masjid at this site. Most of the Hindus in India were against this at that time, but as they were power less and were ruled by Mughals. Their dream of reconstruction could not fructify with radical spread of Islam by Mughals & huge forced conversions or killings of Hindus and destructions of temples being carried across India during this regime.

Hindus in India had to witness the slavery of 450 years of Islamic and British rule, prior to Independence and around 70 years of Judicial Mockery post independence to construct Lord Ram Mandir or temple in Ayodhya. Today the wait was over with many eyes filled with joyful tears rolling out of many Hindus across the world who dreamt of having the temple be reconstructed. Many people thought that this dream will not full-fill in their lifetime but today was a dream come true for all the Hindu devotees and believers of this great religion. 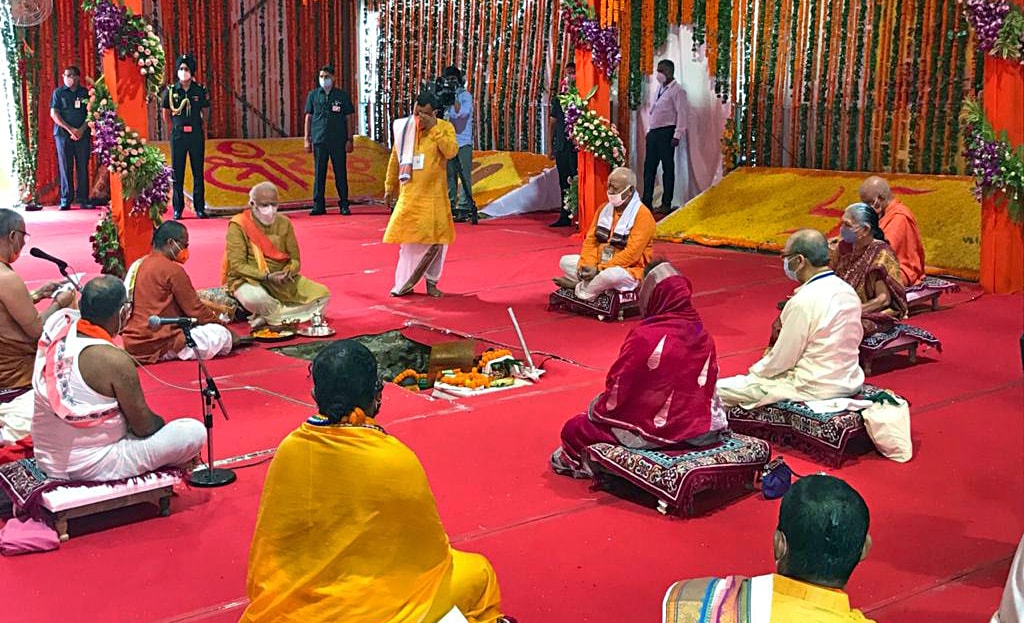 Many people have died for this cause and some were brutally killed by Muslim Mobs during 1992 & 1993 riots. Hope all the souls of these men who laid their lives for the great cause and innocent people who died will fill with happiness and rest in peace for ever. The current government which is ruled by BJP had fought all the elections on reconstruction of this temple and many times it could not do. But after the historical verdict given by Supreme Court which is the apex court of India, the path for construction of temple had been cleared. This shows the ethos and secular ideologies in Hinduism, which is not possible anywhere in the world. Being Majority Hindu populated country, people of the country had to wait 70 years and many people died without seeing this auspicious occasion. Thanks to the communists and the congress government which always breaded on minority appeasement and alienating Hindus because of their vested interests.

This occasion can be compared with the largest lifetime event after Indian independence. As many freedoms fighters of this nation have given their lives to achieve freedom from Britishers, many Hindus have relentlessly tried to get this task completed inspite of repeated PILs, petitions, cases filed by so called litigants and miscreants to stop this sacred temple being constructed. They dragged the issue to the core, that few generations have passed away without even seeing the justice light at the end. This had created negative feeling and frustration among many Indians that Hindus are a minority in their own land. But at last the present government and Supreme Court had done a good work to fast track the process and ultimately the temple is being reconstructed at the birth place of Lord Ram.

All we can say is that Lord Ram had to face Vanavas for 14 years during his era of Ramayana or Threthayuga, but during this era he had to face 500 years of Vanavas in Kaliyuga.